From Your Heart To Feet To Changing the World

From Your Heart To Feet To Changing the World

Michael was a beautiful boy. I guessed that he was about 9 years old and although his shirt was worn out, 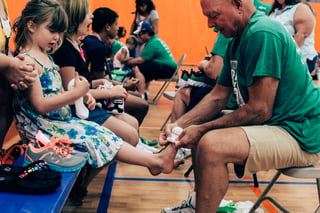 his jeans torn, and his shoes and hands were dirty, he had a charming smile that was warm enough to melt a crusty heart.

As I pulled off his mismatched shoes, I could hardly believe his rough little feet. Unlike the soft feet of most children I have known, his were calloused and rough, neglected even – a direct reflection of a life lived hard. Michael was there in 2011 at First Baptist Church in Clover, SC, with about 600 other children who shared a common story, one of poverty. It's rampant in York County with over 50% of public school children on some type of food assistance program.

This story began several years before 2011 when I first met Manny Ohonme, the founder of Samaritan’s Feet. Manny’s story began over 30 years ago in Lagos, Nigeria. At the time, to own just one pair of shoes was beyond this child’s wildest dreams. Yet Manny won a contest and received a brand new pair of shoes. He also won encouragement, a belief in dreams, and a gift of hope.

After working to develop his talents and skills as a basketball player, Manny earned a full basketball scholarship to college in the USA. He graduated, became successful working in the technology industry, and ultimately his passion led to the founding of Samaritan’s Feet.

I met Manny long before I knew the existence of Rhythm Systems, at his new distribution facility in Charlotte, NC. Manny and I sat in a conference room while he shared his story, and although we were unable to collaborate at the time, his story stuck. A few years later, while living in York County, South Carolina, I had the chance to partner with Manny and Samaritan’s Feet in distributing shoes to children in the four local school districts.

After raising funds to purchase the shoes and socks, arranging for a venue in each school district to distribute the shoes, training and organizing volunteers, and working after hours to prepare for the distribution day, I was tired. I had no idea that on that day, the day I met Michael, I was to be paid back in multiples. Michael sat there with his big brown eyes and said thank you over and over. Suddenly, he looked me square in the eye and asked if his mommy could have a pair of shoes, too. He continued to explain that his mommy had worked an extra part time job all summer to raise the money needed to buy him and three siblings clothes for the upcoming school year. He was thankful that she had saved enough to buy each child 2 "new" pants and 3 "new" shirts at the local thrift store. Michael told me that he loved his new clothes.

But Michael knew that his mommy had spent everything she had preparing him and his siblings for the upcoming school year. Michael didn't know why or where his dad went - just that he had recently left. Even so, Michael's heart was to think of his mom. She had spent all her money on him and his siblings – and he knew that she needed new shoes just like he did. There was no way to say no, and, there was no way to give all that we wanted to help this boy and his family. We gladly gave his mom a new pair of shoes and in so doing, we all had a chance to cry in joy together as they hugged us goodbye.

When Michael, his mom, and siblings left, I realized that they had given me something, too. They'd given me encouragement to think of others in addition to myself, that dreams can come true, that it never hurts to ask for what you want, and they gave me the gift of hope that each of us, and our companies, can have an impact beyond the immediate, and beyond what can be seen. That thinking took me back many years to my first conversation that day in the conference room with Manny. He started my introduction to little Michael with his story of inspiration and the need for shoes.

Samaritan’s Feet is attempting to create a world with zero shoeless children. When I met young Michael in 2011, our fundraising efforts helped over 2,500 kids in York County receive a new pair of shoes, socks, and even some school supplies to ready for the school year. I had the joy to touch a good many of those feet. That impact was instigated because I met Manny, he told his story, and he inspired me to think about the impact, the life altering impact, of something as simple as a pair of shoes. When you come to our Breakthrough Conference on October 19-20 this year, you’ll have a chance to meet – and hear from, Manny. You’ll be changed for the better – and quite possibly, so will a child. As part of our conference, you'll have a chance to help us raise money for Samaritan's Feet, or you can click here to make a direct donation.

Is what you do inspiring? Is there an impact larger than the bottom line? Are you conscious of your and your company's opportunity for life changing impact? When you find it, it can drive teams, culture, and success in ways you never envisioned - and have an impact that goes beyond what you can see. Thank you, Manny, for sharing your story with me. I encourage each of you to share your stories below. Inspire us.