How to Stay Sane While Growing Your Company: A Case Study

How to Stay Sane While Growing Your Company: A Case Study

Everywhere I looked around the office, people were dashing, working feverishly, heads down, eyes glued 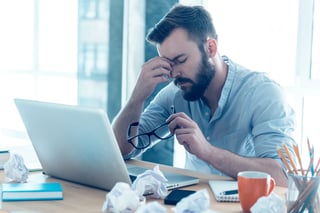 to screens. It was like watching a group of mad scientists  about their work, and there was a definite edge of “crazy busy” in the atmosphere. Teams were operating at the mercy of every single problem, and by his own admission, the CEO’s marching orders changed by the day, or even the hour.

The CEO (let’s call him Fred) shared with me that meetings at his company were usually his own random agenda of everything that needed to be fixed, or worked on, or improved, or updated, or reinvented, or adjusted. He would strongly suggest solutions for specific problems that were clearly on his own front-burner, and there wasn’t much discussion. As he walked away from these meetings, people followed him down the hall, asking questions. They would then scatter to get back to the job at hand, only to find, according to Fred, that his directions would change the next day.

A-Players were starting to leave; morale was really low; people were exhausted; there was no joy. People were starting to feel like they were failing the company, Fred, and themselves. As for Fred—he had stopped sleeping. He was listless and unsettled, knowing that surely it didn’t have to be this way. To me, he even looked beat up and sad.

The signs of this company’s illness were everywhere—stress, anxiety, a hint of corporate depression, even a victim mentality. People were moving at 90 mph—but they weren’t moving toward something important. They were busy, but it never felt like they were getting anywhere. In spite of themselves, they were successful; it was a by-the-numbers success, achieved at a cost to morale, the right kind of productivity, and leadership capacity.

What I saw at this company wasn’t unusual. I’ve come to think of it as a form of corporate neurosis. It often looks like a leadership team being blindsided or just reacting to the latest challenge. It looks like poor progress on strategic initiatives because everybody is too busy firefighting. It looks like half-starts and wasted work from constantly shifting gears. And it looks like burnt out talent and a high-stress culture.

Creating a sense of order from chaos is a journey. If you’re like Fred’s company, though, the pain might be so bad that most any solution sounds good. Many leaders are tempted to grab whatever is closest to alleviate the pain, even if just a little bit. But grabbing for an aspirin only masks the pain for a little while; it isn’t a permanent solution. The key is getting to root causes.

That was never more apparent than when we introduced Fred and his team to the Think, Plan, and Do Rhythms and got them set-up in the Rhythm software. We asked them to put their current company priorities into Rhythm so that they could begin to track them and we could review them. When I opened their Rhythm Dashboard, I was shocked. They had entered thirty-four key priorities. Yes, thirty-four! Add to this incredibly unrealistic list the “CEO’s flavor of the day,” and they had way more priorities than they could possibly devote attention to in a week, a quarter, or even a year. When you have this many priorities, you really don’t have any priorities at all. No wonder they were losing sight of some of the deliverables and standards that mattered most to their customers. It was a culture of chaos.

To get the most important things done, Fred and his team needed to be able to prioritize their strategic intent and commit to accomplishing them in a disciplined and systematic way. This is an essential ingredient of great execution that drives growth. All it takes is a Think Rhythm and Plan Rhythm to build agreement on and commitment to the right few priorities—choosing what to say yes to and what to say no to. When your priorities are clear, your A-Players can align their work to achieve them, the company can devote the right resources to making them happen, and people and teams can be held accountable in a low-stress, solution-oriented way. Together, you’ll make much greater progress on the things that matter most.

In time, Fred and his team were able to make this shift—to regain control by creating focus, clarity, and alignment. Month by month, morale began to shoot through the roof, transparency and accountability became the rule, and the quality and dependability of their work more consistently  customers’ expectations. In addition, growth and progress on strategic initiatives became even more spectacular.

In my initial consultations with Fred, he recognized that he and the other executives needed to first start with a meaningful conversation about the fundamentals of the company’s core strategy if they wanted to improve their focus. So they hit the “stop” button on fire-drill meetings, took a time-out from the chaos, and gave themselves the space to have a strategic leadership conversation. From this foundation, their discussions leveraged the collective intelligence of the team and revealed that from a micro-view their success and growth had created inconsistencies in the three areas that mattered most to their customers: turnaround time, communication, and quality. It was here that their new-found journey began.

As time passed, creating a sense of discipline won out. One outcome of their discussions was a recognition that quality was the greatest strategic risk to the company. Turnaround time and communication were important, even critical; but when you considered the potential for any of these attributes to kill the company, none could do it faster than less-than-stellar quality. So quarter after quarter, they set Individual Priorities for scrutinizing and analyzing every facet of their client services and operations. They created Action Steps, with department leaders, to form focus groups on everything from accuracy in order receipt (new project submittals) to advanced technical writing. Their greatest focus was placed on their peer review process, where each document must pass a stringent technical review prior to being published to the customer. By the end of this first year, their effort, attention, and resources had established protocols such as Fred reviewing six reports each week, resources like engineering capturing and then reporting on best practices, and incentives like a bonus program based on stated key company metrics.

With tenacity, persistence, and a refreshed commitment, Fred and his team made incredible strides. They ditched the spreadsheets and used the Rhythm software as their dashboard for all things strategically relevant to the company. They narrowed their 34 “priorities” to their top five Annual Initiatives which in turn allowed them to set Quarterly Priorities that would support their Annual Initiatives. By establishing Quarterly Priorities, they set themselves up to status their forward movement (or not) each week (since each Quarter is a 13-Week Race!). Over time, they got stronger and stronger by staying committed to their disciplined approach. Information was shared in real-time, mutual problem-solving became the norm, joint brainstorming on how to fix a challenge or how to remove a roadblock on an important priority began to uplift their sense of being a team that’s doing important work and building a company that (in their business) saves lives. With this, they could grow in a way that also allowed them to grow with purpose.

Small successes led to bigger successes and the payback on establishing a healthy cadence became evident.

A Journey of Discovery: Reaping the Rewards

Discipline. It’s one simple word. It’s also very difficult to translate it into your everyday existence. However, if you can master the art of discipline, your company will cease to be as chaotic and will have a higher sense of order. Discipline helps you develop new routines that will allow you to stay focused and aligned with what’s most important. A healthy routine isn’t stagnant, boring, and confining. To the contrary, it allows you to be more creative and to think more clearly about what matters most. Discipline gives you the gifts of alignment, focus, and clarity.

According to Fred, “What I like about the Rhythm Methodology is the rigor, the cadence of it, the purposeful, deliberate repetition. The executive team and I understand what’s expected of us and we consistently focus on meeting those expectations.” Fred was able to reflect on his journey of discovery: “Focus at the executive level has helped build a laser-like focus throughout the company,” all made possible by the clarity that comes with  on and alignment around the best few top priorities.