My husband used to coach a 3- and 4-year-old soccer team (the “Gorillas”) at our neighborhood YMCA. If 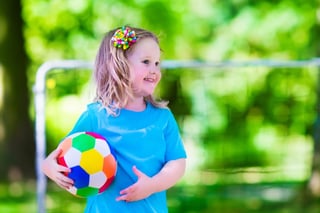 you’ve never watched toddlers play soccer, it is pretty hilarious. I remember one game, someone walked by the sidelines with a puppy, and every player on both teams ran off the field in the middle of the game to pet it! I also remember one game where little Petunia with her precious braided pig tails was the goal keeper (the kids rotated so everyone had a chance to be the goalie at least once in the season). A particularly big, fast kid from the other team kicked the ball right to her, and she quickly moved out of the way, turned to watch it go in the goal, and then clapped! “We scored!”

Clearly, my husband and his fellow coaches had some work to do clarifying roles and goals for their team. But this problem is not confined to the YMCA youth soccer field. In fact, it is pretty pervasive among adults in the workforce as well. According to Gallup, only about half of workers in companies worldwide “strongly agree that they know what is expected of them at work.”

While role clarity may be harder to come by than you might think, it is critically important in a number of ways. According to one study, “low role clarity was associated with a 3 times greater rate of very long absences than high role clarity.” Another study points to the relationship between role clarity and improved job satisfaction, organizational commitment, and customer service quality. In their State of the American Workplace report, Gallup sites “unclear and misaligned expectations” as one of the top reasons employees are not engaged and motivated to perform to their full potential. It’s easy to see how a lack of clarity could be costing your organization significantly.

Are people on your team wondering, "what is the purpose of my role? And, how do I know if I am being successful?" Or worse, like this controller, do they assume they are being successful while their managers are wringing their hands at their lack of performance?

So, how can you create an abundance of clarity for your team members about what exactly they are supposed to be doing and how their success will be measured? I’m going to share two simple tools you can implement to provide the gift of clarity to your team.

If she had a Job Scorecard, little Petunia would have understood that her job as goalie was to keep the ball out of the net. And, if the controller and CEO had agreed on Red-Yellow-Green success criteria for collecting client payments, they would have been on the same page from the start, avoiding months of tension and poor performance. Give your team the gift of clarity by implementing these two simple tools in your company - trust me, they will be appreciative! Nobody wakes up in the morning excited to go disappoint their boss. Your team wants to be successful, so help them with a clear vision of exactly what that looks like.

Looking for some Goal setting examples: