Think Before You Communicate Difficult News

Think Before You Communicate Difficult News

As leaders we are often faced with having to convey difficult news (or seemingly drastic new plans) to employees and team members. Are you doing this well? Do you couch big announcements between details of company softball team uniforms and new employee orientation information? Or do you take the opposite tack and call the staff together to feed them a forceful and factual statement, without any consideration for how it will affect their lives and careers?

The reality is that most of us fall someplace between those two extremes. Regardless of where you sit on the continuum, here are the ways I’ve seen leaders prepare to serve difficult news successfully.

Consider the communication environment. For example, what is the best day and time to deliver your news? Which executives or colleagues should be there to back you up? What material, data,or facts (if any), should accompany the announcement? I've seen leaders fire a team member on Friday afternoon thinking this was the easiest way with no commotion. From just the single view of workplace violence prevention, this is the wrong approach. Someone fired on Friday has no opportunity to hunt for a new job - and therefore can only think of one thing... how unfairly you treated them. That’s one reason among a host of others to think through the timing. 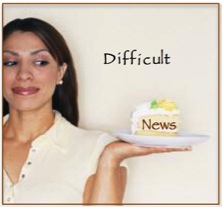 Determine the optimum amount of contact. The more complicated, difficult, or sensitive the information you have to convey, the more contact you'll need with the people involved. You may want to break down the large group and have a pre-meeting with those who will be most acutely affected. In a union shop, this means meeting first with stewards and others who could be prepared for complaints in advance.

Deliver the news in a warm yet straightforward tone. Address the likely short, medium and long-term outcomes. Then, finish by sharing how the news is expected to impact employees themselves. If you do not yet know the full consequences, make a verbal commitment to another meeting or announcement when more information is available. Consider announcements and updates on a scheduled or regular basis in order to "control" and focus the message. If you don't do this, someone will fill in the blanks (read that as “make up") with what they don't know - and dilute or poison your message. Nothing makes the sting of major organizational changes worse than manipulation and sidestepping. With a straightforward approach, you will win trust and increase your reliability with peers and subordinates while increasing your own leadership credibility.

A Step by Step Plan to Serve Up Difficult News

Make smooth and effective announcements by answering these questions in advance:

1. Who should be present and when is the optimum time to make the announcement?

2. What informational materials can I hand out at the time of announcement?

3. Is there a subgroup that deserves to hear the news before the meeting?

4. What can you share with the team that will help them understand how the news, changes, or plans will affect their work and personal lives?

I recently worked with a client that was going through a major transition. As a public company, they had been battered by the economy and a poor decision on an international acquisition, and they were forced to consider layoffs. Once the decision was made, layoffs were planned and announced.

Soon after the announcement someone must have considered workplace violence a possibility. After carefully crafting a revised policy, the decision was made to make the announcement that guns were not allowed on company property.

Instead, the only communication was a picture of a gun with a circle and line through it that was posted at all entrances and exits. This was the sum total of their communication of revised policy. A ranking leader said to me one day after the posting, “If I wasn’t thinking about bringing a gun to work before, I’m sure thinking about it now.” Too bad the internal communications team didn’t follow the advice of CEO Matt Rose (BNSF Railway) who said, “think before you communicate.”