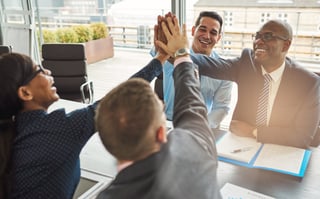 results. Leaders just like you are desperate for processes that will predictably generate business growth. Growth conversations naturally lead to a discussion on sales, sales people, and sales predictability. This immediately leads me to one of the greatest sales growth resources I know, Jack Daly. I approached Jack with the question, “How can CEOs and leaders gain the predictable result of increased revenue and profit?” Jack's answer was sales contests. I knew you’d want details, so below is more of Jack’s answer:

I’ve been selling for six decades and this much I know: Sales people love competing in companies that can tie sales–incentive prizes to desired revenue and margin goals. Let me say that another way. Done with thought, sales contests are not expenses but rather investments. Before digging into the contests directly, let’s step back and look at compensation for sales people.

All too often, companies will tweak one or two components of the overall “comp” plan, which is not the best approach. Here are the component parts of the comp plan: salary and benefits, reimbursement of out-of-pocket expenses, target incentive pay, over-target incentive pay, contests, and recognition. When looking at restructuring your salesperson compensation plan, we recommend each component be reviewed and cobbled together in a comprehensive approach, which reinforces the overall desired goal. Today, I will address the contest component.

“All in all, recognizing successful sales people may be the single most critical way to boost sales results,” says Nancy Grden-Ellison. Here are five benefits a company derives from sales contests:

Here are some reward program guidelines to be considered:

Recognition and rewards provide an effective low to no-cost way of generating high levels of performance in both good times and tight times. Let’s look at some basics in constructing sales contests.

1. I (Jack) like saying it this way: daily, weekly, monthly, quarterly, and annual contest, each as an overlay for one another. This keeps even more and more of the salespeople “in the game” and provides an air of excitement and enthusiasm throughout the team. Passion sells!

2. Structured properly, most, if not all, of the contest payouts can be directly tied to sales and margin results. When the sales people perform and deliver the results, there is a contest payout. No results equal no payouts.

4. Work hard to design the contests so as to avoid “same people win” syndrome.

5 .Design a contest to be both creative and fun.

Let’s learn from some examples. I call the first “The Mercedes Club.” I once had a company with 120 sales people working at an inbound call center. The building parking was insufficient to handle all cars, so late arriving folks had quite a walk. One day I suggested to my two partners that we designate the spot closest to the front door to the top producing sales performer. At first, they wholeheartedly agreed. When I mentioned that we put a Mercedes in the spot for the winner, they declared the idea as “too expensive.” No, I said. I planned to use one of their cars. That didn’t go over well either.

I asked what the monthly lease payment was and I found it to be about $950. I said let’s round it off to $1000 dollars and throw in a winner’s shirt. The winner would keep their shirt but the car would be up for grabs next month. We guessed it would result in 40 additional deals per month, where we made profits of $1500 per deal. That’s a $60,000 dollar return on a $1000 investment. We agreed it was a deal worth making.

Here are some of the key components:

1. A single winner each month

2. The contest standings were posted daily during the month for all to see and to raise to competitiveness

3. An awards ceremony monthly with the prior month winner handing over the keys to a new winner. The car was in the background for a photo, and each month an article with the photo was sent to the press saying that we gave the Mercedes away to our top sales performer

4. Continuing reinforcement for all on this team as each month the contest began again

5. The bonus result was that the traveling car became a recruiting tool as friends of each winner inquired how they could get such a job

Thank you, Jack, for the above ideas. Stay tuned for more of Jack’s ideas in a future blog. Meanwhile, give some “think time” to how you can implement sales contests in your company and comment to share what’s working, what’s not, and any lessons learned.