Our next Valentine’s Day contest winner was Chris D.: “My question is around sharing ideas to motivate 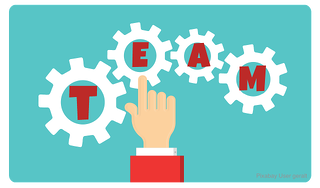 and improve the performance of team members that seem to always lag behind. These are good people, but need that additional coaching to succeed and not hold the team back. We’re not ready to ask them to get off the bus just yet, so any suggestions would be appreciated!”

Your Question: How do we motivate and improve the performance of team members that seem to always lag behind?

Chris: You’ve hit on a question that many people struggle to answer. It’s also an area where human dynamics play a huge role. Most of us want our team members to be successful, yet many lag behind in that they simply do not demonstrate the same sense of urgency as others. Hence, a perceived imbalance is created.

In my many years as a Business Growth Coach, I’ve heard the same question asked over and over. Each time the question is asked, I see the anticipation in the eyes of those who are asking me this question. The eyes have a piercing look that connotes a sense of begging, almost pleading, for “the answer.” It’s as if they’re thinking, “If I ask the question one more time, I’ll get the answer that’s eluded me for so many years!” So take solace in the fact that it’s not just you. It’s a struggle for many. Hopefully, this response will help position a few thoughts in a way that will somehow provide a framework for direct application.

Two Questions in One

One core challenge with this type of question is that it’s two questions instead of one. What is needed first is to focus on asking the right question.

How do we motivate team members who always seem to lag behind the rest of us?

Creating an Environment: For the most part, motivation is an inside job. It’s intrinsic; it comes from deep within and resides with its neighbor, Passion. I always find it interesting when someone calls me to ask me to come and talk with their supervisors on how to motivate people. In all honesty, you can’t motivate anybody. Each person has to find desire from within. Some people simply don’t have (and won’t ever have) the desire needed to motivate themselves to higher levels of performance. Others, however, simply have never been given the opportunity to succeed. While we might like to think we can ‘motivate’ someone by telling him his job might be in jeopardy (i.e., “Get motivated or else!”), we have to stop and think: Is that really going to get you the long-term performance you need? In rare instances, it might. But in most instances, it’s a short-term payoff at best. You, as an external source, can’t ‘motivate’ anybody. What you can do, however, is create an environment where people should be motivated to do the very best they can.

The second part of your question is actually the better question: How can we improve the performance of a capable team member who’s lagging behind the rest of us?

This is the better question, but we usually don’t ask it because we don’t like the answer we know we’ll probably get. But, you answered your own question when you stated, “These are good people, but [they] need that additional coaching to succeed.” While I don’t know your specific situation, there are nonetheless several tips for helping someone close to gap on a performance issue. What’s needed, though, is a professional, but direct, conversation. It helps that you note you’re not ready to ask them to get off the bus yet. However, clearly you’re frustrated. And you should be. People dread working with them for many reasons; still others just pick up the slack and do the work themselves vs. having to work with them. Under-performers are a drain on the total team, and they’re a threat to anyone trying to build a high performance team. There’s only one way to turn performance around, and that one way is to have a meaningful conversation. There’s just no way around having a discussion.

To that end, here are a few tips that might help prompt your thinking on what to say to peers who are under-performing:

(1) Positive Intent: Everyone deserves a chance to understand what’s expected of them. While perhaps you shouldn’t have to ‘tell’ someone this, in reality…you do. Clearly, you still care that these people are successful. That’s a good thing because conversations like this one need to begin with positive intent. You truly do need to hope that these people can be successful. You have to want them to stay for all the right reasons.

(2) Have a Conversation: As you open a dialogue with a peer, ask one or more of the following questions during your discussion:


(3) Prepare to be Honest: If this is a problem that bothers you and others, then be willing to address it vs. ignore it. That’s what’s fair. It also raises the bar on team accountability and sets an example. As the dialogue ensues, you should feel free to interject your own perspectives. Your honesty can be tempered with your positive intent—that you truly do desire the absolute best for the person. How other people accept your intent is up to them.

(4) Give Specific Examples: Be prepared to give specific examples vs. merely talking in generalities.

(5) Manage Your Own Expectations: The other person might become a bit defensive. Expect that rather than being surprised or intimidated by it. If you’ve approached it in the right way with the right intent, that’s all you can do. Many times, no one has ever bothered to tell the person how frustrated others are with his/her lackluster performance, and now you’ll be the messenger (suddenly, it might seem to the other person, out of the clear blue sky). While avoidance of an uncomfortable situation is usually the root cause, not having the right kind of discussion with a troubled peer has done nothing but engrain the very behaviors that others on the team find so irritating. Therefore, manage your expectations if the person becomes a bit irritated or seems surprised, etc.

(6) Personal Accountability: Before the conversation ends, clarify what the person might consider doing differently from this point forward. Sometimes people are simply overwhelmed; they succumb vs. trying to figure out how to prioritize and focus on what’s most important. If needed, be empathetic but also be willing to help the person recognize what s/he might want to focus on doing.

(7) The Framework: The foundation for any such conversation should be the organization’s Core Values (as clearly lower performers are usually not living those values). Some teams also have guiding tenants, or ground rules, for working together that align with the company’s values. Use those as a framework for your discussion.

(9) Stop the Cycle: If other team members complain about the performance of others, it’s also good to ask them what they might consider doing about the situation. Raise the bar and get away from the cycle of complaining and instead create a cycle of “doing something about it.” What is that person going to do to help underperforming team members understand the frustration they’re causing?

(10) Create Mutual Accountability: In your Weekly Meetings, create mutual accountability by asking tough questions such as: Why hasn’t the needle moved on this project? What can we do to help you get unstuck? What are the barriers? Also, many under-performers try to justify their ‘performance’ by always statusing their success as “Green.” Things are moving forward! In reality, though, you and your team know otherwise. Don’t ignore what you see. Instead, ask questions as noted above. It could also be that the success metrics are set too low (or are simply the wrong ‘success’ metrics altogether). Suggest recalibrating the metrics to more challenging (although attainable) ones. Holding each other accountable is what great teams do.

In summary, Stephen Covey noted that every organization is perfectly aligned to achieve the results it’s getting. If, over time, the under-performers don’t do anything differently…then it’s time for a discussion around the potential implications of continued poor performance. If there are no ultimate accountabilities, then you’ll likely live with the under-performers for many years to come. Caring enough, though, to have a meaningful conversation that is embedded with positive intent is the best way to elevate not only the performance of under-performers, but also of the entire team.