BHAG: Why Some Companies Soar

BHAG: Why Some Companies Soar

It just seems that some companies soar, and when we see them soaring we sit back and wonder what the heck they’re doing to “get it right.” But it’s not that these companies are simply successful (aka “soaring”). It’s that you can literally see that they’re soaring. You can feel it. Doing business with them, no matter what industry they’re in, is effortless. You look around and see everything working. What’s the magic?

I’ve worked with a lot of companies from all sectors over 20+ years, and I just saw two more “soaring” 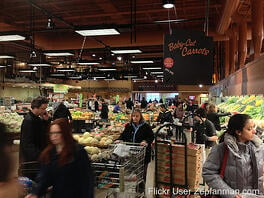 companies this past week. I worked directly with one of them; I had the pleasure of simply observing the other one. The one I observed is Wegmans Grocery Store. (Yes…a grocery store.)

Many years ago, Wegmans’ BHAG (Big Hairy Audicious Goal) began with their

(2) with what they believed they could be the very best at doing.

“At Wegmans, we believe that good people, working toward a common goal, can accomplish anything they set out to do. In this spirit, we set our goal to be the very best at serving the needs of our customers. Every action we take should be made with this in mind.”

As I read this, I thought: It’s a grocery store, for gosh sakes! But yet, in 2013 Wegmans received more than 4,000 requests from people asking the company to open a store in their community. Another 7,000 customers wrote to say how much they like shopping at Wegmans, because they like the products and services offered or appreciate the way Wegmans employees treat them. Who wouldn’t want THAT?!

As I approached the main entrance of Wegman’s, it simply appeared like any other large grocery store: Name on the building, sliding doors auto-opened as I approached them, and I was greeted by grocery baskets ready and waiting. Nothing really unusual. I continued down the long internal entry way and slowly I became aware of music—lively, upbeat music. I rounded the corner and there it was—a grand entrance indeed. The music was much louder at this point…and lively…and engaging. The colors suddenly turned from shades of monotone brown into an oasis of bright blues, greens, yellows, and oranges. As I wandered in and aimlessly began my stroll through Wegmans, I began to notice the intriguing layout and store design, which was the incarnate of the concept that had been in the head of their founder. And I saw a smile…and more smiles….and then lots of smiles. All I can say is that the people that work at Wegmans can’t smile enough. It got to where I started to look for someone without a smile.

I had read about the founder of Wegmans, and I realized I was seeing his early Vision in action. It was absolutely nothing short of an amazing experience. It was like being in Disneyland (and who doesn’t like Disneyland?)! The people, the service, the product, the business itself, the merchandising, the café, the burger bar, the wholeness of their foods…it’s like being a kid in a candy store.

I stood silent in Wegmans—in the middle of this entire ‘landscape’ of a store and I just watched people—the smiling and ever-so-eager-to-serve employees and the customers, who all clearly considered the normally mundane process of grocery shopping to be anything but boring.

As I just stood there observing…watching…analyzing, it dawned on me that this is what a BHAG can do for you to raise the bar on:

It’s greatness in action, and we don’t see that very often in the business world. We might see “goodness,” but we don’t see so much “greatness.”

All of us could learn a little from a weekly grocery run to Wegmans. And who would have ever thought a grocery store could teach us the value of a living BHAG?

They bring the journey to life at Wegmans. Do you?