I am in Boston at Hubspot’s Inbound 2014 conference. It’s been a long day and I’ve got to get back to my hotel. Instead of hailing a taxi, I pull out my iPhone, open my Uber app, and book an UberX car. For those of you who have not tried Uber yet, you’ve got to try it. It is the easiest way to book a safe and uneventful ride. It’s a great alternative to a taxi. 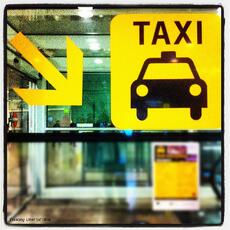 I have had good experiences with Uber. But, not on this night.

The UberX car pulls up and I jump in. “Did you put your address in the Uber app?” the driver asks. “No,” I replied, “I am going to the Marriott Copley, in Copley Square.” “Well, you need to put the address in.” “Do I have to? I’ve taken many Uber rides, and I’ve never been forced to put an address in. If I took a taxi and asked the taxi to take me to the Marriott Copley, they never ask me for the address. Anyway, if you don’t know where it is, you can drop me off in Copley Square and I’d be happy to walk a little.” He suggested that I input Copley Square as a destination, which I did. He also reassured me that Copley Square is a prominent location in Boston that he knew, and that he would have no problems getting me to my hotel.

So off we went. After a few minutes, I could tell that the driver was taking a different and longer route to Copley Square, so I asked him if he knew the way. I shared with him that he might be taking a longer route. He replied that he is a new Uber driver. I asked him again if he knew where Copley Square was, because that had nothing to do with being new to Uber. He replied that I should have put in the proper address, but nonetheless, he assured me again that Copley Square is a prominent location and he would have no problem getting me there. When we finally arrived at the hotel, I knew he had taken me for a longer ride than necessary. As I got out of his car, he reminded me that he is new to Uber.

This was not a good Uber experience. My Uber receipt arrived, showing that I was charged $19.46. Since I had taken this same trip the day before, I felt that my driver had indeed taken me for a ride. I rated my ride 2 out of 5 stars and noted my dissatisfaction. As you can see from the copy of my comments below, I suggested that Uber owed me $4.00:

I made a mental note to myself that after the conference tomorrow, I would take a regular taxi to the airport and moved on. Forget about Uber. Who needs this aggravation? I was amazed when I woke up the next morning and found this email from Danica at Uber: 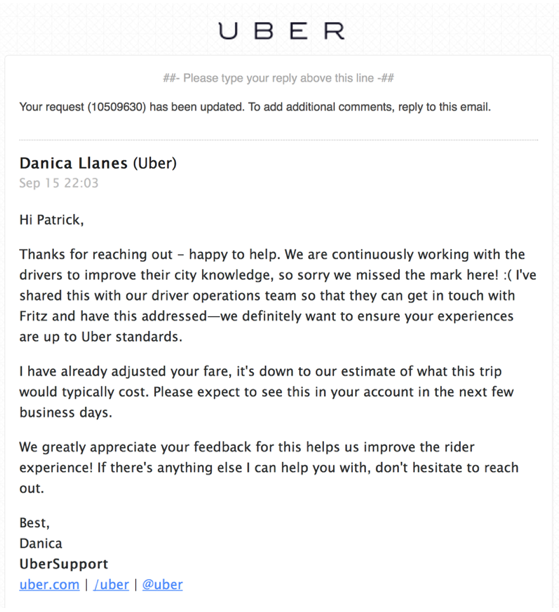 I was amazed that Uber took action so quickly and that they had adjusted my fare. While I had suggested that Uber provide me with a $4.00 refund, I really did not expect it. I was just blowing off steam. Based on this fast email response, I felt safe using Uber. I decided I liked Uber, and I forgave Uber for last night. I went from an unhappy customer to an Uber fan in a nano-second! I made a new mental note that I would not use a regular taxi today after all. I would book an Uber ride to take me to the airport.

But wait… it gets better. The next day I received an email from Uber, confirming that they had refunded me $6.46 even though I only suggested a $4.00 refund. They did not just give me what I asked for; they calculated what the fare should have been without the longer ride, and credited me the difference. Wow. I was blown away. This is great execution that converted me from a potential detractor to an advocate.

Here is what I learned from this customer service experience.

I am now an Uber fan. Uber took a negative experience and proved to me that they are a brand that I can trust. I am not at the mercy of a taxi driver. Uber is going to take good care of me.

Do you have great execution around customer complaints and issues? Are you able to turn an issue into a customer delight opportunity? Great customer service only comes with great execution.