You may have heard the old saying; “Putting lipstick on a pig doesn't make it more attractive!” You may 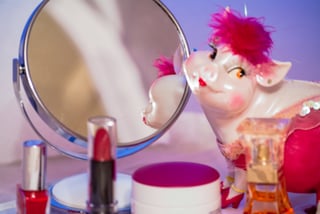 chuckle at the meaning, yet I see it often with CEOs and leadership teams while hearing their argument that they move too fast to slow down and work on the things other successful companies do.

The arguments remind me of a home for sale here in Charlotte. I believe real estate is a good investment when bought at the right price and in the right neighborhood, so I will sometimes spend weekends looking at properties to purchase. Nearly a year ago to date, I looked at a property that seemed priced fairly. Just before I was able to physically walk the property the price was dropped nearly 7% - and that’s a red status indicator to me. Despite the new information, I went to look the property over. This home had foundation issues and new windows that had been so poorly installed that I could insert my finger through the outside seal into the house. Add poor cabinets, poor installation, a “new” deck that was not built to code, and you have a poor investment at any price. Yes, someone watched a “flip property for millions” program, and I assume, like all professionals, the TV show made it look easy. I was reminded of that home because it is still for sale. There was lipstick on this pig but no one has found it attractive.

Another example is a small company that was for sale here in Charlotte. Although they did have the stated revenues, they owned nothing. They booked business and contracted other professionals to deliver. The professionals owned their own equipment; the business supposedly owned the customers. But could you imagine investing in that company when they own no equipment and had no non-compete or non-disclosure agreements with the professionals that they used? Apparently, no one else could imagine either since the business did not sell. The lipstick was reasonable revenue yet on closer examination there was no real value to the pig.

Now think about your business. Are you putting on lipstick as a facade or are you building your core? Have you set goals with no action plan? One past client set lofty sales goals - based on increased sales to one extremely large retailer. Since this was their chosen direction and focus, I advised two additional initiatives. That they should:

They reluctantly agreed to my #1 recommendation and politely declined #2. To their pleasure, the retailer increased purchases the following year. To their demise, the client was lost the following year (after growing to 44% of overall revenue). The retailer was their lipstick, but the lack of diversity in revenue was a pig.

Here’s another example of a pig. To create a consistent nationwide framework and approach to prepare for, prevent, respond to, recover from, and mitigate the effects of incidents regardless of the incident’s cause, size, location, or complexity – we have a National Incident Management System (NIMS) here in the USA. NIMS is a comprehensive, national approach to incident management that is applicable at all jurisdictional levels and across functional disciplines. (http://FEMA.gov) Now consider a large transportation company with disaster recovery teams in place. Imagine this company is really good at recovery from disasters and prided themselves that, IF the worst were to happen, they were the best at recovery. They built a communication and command structure that had worked over and over. Then, they had a major incident and, because they built a command structure that did not align with NIMS, authorities took over. This allowed authorities to control which contractors did repair work (costing more than the internal company teams) and job site release back to  was delayed by authorities who had no urgency to get back to business. The company's loss of incident command resulted in millions of additional dollars lost. That’s expensive lipstick.

Put away your lipstick and focus on your core - core values, core purpose, core objectives for projects and priorities, and more. Rather than being the weak link between intention and implementation, you should instead be the direct link to driving predictable results. What facade will you strip away today? Where have you, or your team, put lipstick that needs removing? If you aren’t constantly asking the question, then you risk what’s called a sounder of swine (in layperson - a lot of pigs) – and the lipstick won’t make any one of them look better!